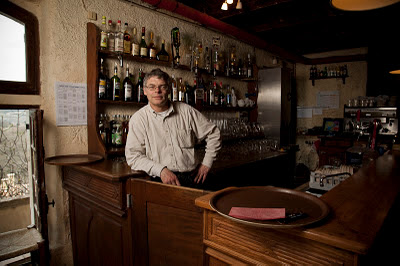 The back-up strobe in my backpack was the Metz 58 AF-2 for Canon. I really like this flash. Metz makes them compatible with both systems that I use- Nikon and Canon. (They also make versions for Pentax, Sony, and Olympus) I'll admit, I'm not a power user of small flashes- I don't so complex system set-ups, or high speed sync, or commander/slave uses, but the Metz does do all that stuff. I use these things as an off camera and manual lighting source most of the time. In the backpack system, this means using it as a light somewhere in the background (there's one on low power in the shot above) and knowing that if the batteries on my Elinchroms died, I could still light a portrait. I've also used them as a direct handheld flash. They've performed perfectly in all these situations. And the best part? They cost about $100 less than the comparable Canon 580 or Nikon SB strobes. Nice.

I added the Metz P76 battery to power the 58, too. This is similar to the Quantum batteries a lot of people use. It's high capacity and high voltage, so you don't have to rely on AA's. I actually hate using this kind of flash with AA's. The recycle time is too long and they wear out way too quickly. You plug the 58 into the P76 and you can shoot hundreds of pictures and have the flash recycle much much faster than it does with AA's. And by using the Metz battery, you don't have to worry about compatibility and warranty issues that sometimes arise with Quantums.

In a week or two, I'll be posting a full review of the Elinchrom Ranger Quadra that is the centerpiece of my "Studio in a Backpack".
Posted by Forest McMullin at 3:44 PM