Andrea and I ended up in the tiny town of Wesenufer on the Danube River in the north west corner of Austria near Germany. We're headed for the Czech Republic and the pouring rain finally got to us, so we stopped. The Gasthof zum Schiffmeister was the first place we went into looking for a room. There was a long table with a few folks drinking beer and they seemed friendly in spite of the fact they spoke almost no English and we speak no German. After we had checked into our room, we went back down and sat at a table near them, drinking beer and playing gin rummy. I asked if I could take some pictures and they agreed after I assured them I wasn't the papparazzi. Over the next several hours, we noticed that people came and left, but that table was always busy. The cast of characters changed continually. Sometimes it was more boisterous and sometimes less, but it was always occupied and always lively.  Several times we accepted schnapz from people sitting there and they eventually invited us to join them.

Franz and Hermann were two of the regulars. 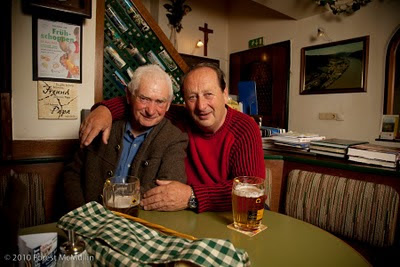 Posted by Forest McMullin at 11:36 PM