Cesky Krumlov is the second most visited site in the Czech Republic, after Prague. It's a Renaissance town with an imposing castle surrounded by winding, narrow, cobblestone streets. After falling into ruin during the years of Communist rule, they've been restoring it since about 1990 and their efforts are impressive. The Baroque and Renaissance buildings are beautiful and often extravagently painted on the exterior. The streets are lined with shops, restaurants, and pubs. And the Czechs certainly know how to make beer.

Mikes Milan owns a flower shop near where we're staying. I was stricken by this large, sturdy man surrounded by the delicate offerings of his business. The fact that he spoke no English and I spoke no Czech was a bit of a problem, but after he called a friend on his cell phone to translate and explain what I wanted, he was happy to let me photograph. 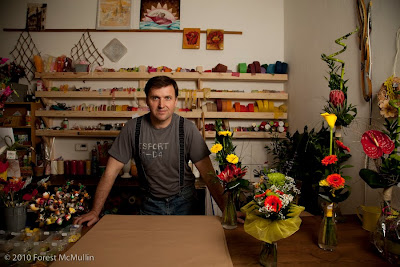 Posted by Forest McMullin at 9:52 AM