Studio in a Backpack 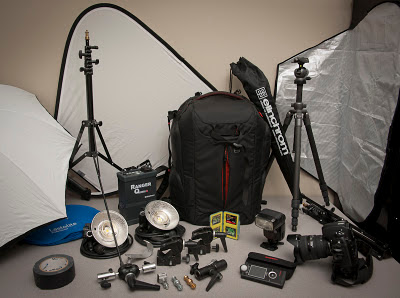 In early 2010 I was lucky enough to live, travel, and photograph in small towns and villages throughout Europe for three months. You can read about it here . I had a specific look I was trying to accomplish in the photographs I produced and I put together very specific gear in order to do that. You can see some of the pictures I did there on my web site .

Over the last year or so I’ve been doing workshops covering my “Studio in a Backpack” and I’ve been asked if I could publish a list of the items in that notorious pack. So here it is. Keep in mind that I had another case with various chargers, cords, and back-ups that I left in my room when I was shooting, but this is exactly the outfit I carried when I went out to photograph. Over the next weeks I’ll be posting follow-ups every few days with more detailed descriptions, estimated prices, and the reasons I chose those particular tools. For now, here goes.


various CF cards, straps, cords, etc.
Cameras to be discussed in a later post
Posted by Forest McMullin at 3:48 PM