Jean Pierre Soalhat is a mosaic artist with a studio east of where I'm living in Lacoste. The village of Caseneuve is way up on a hilltop on the north slope of the Luberon Mountains. The view from near his studio looks like this: 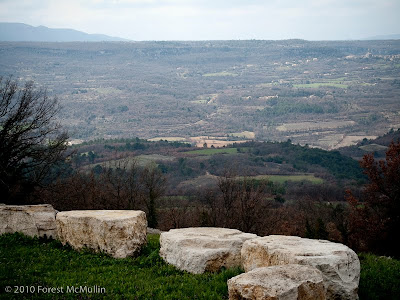 The drive was spectacular and my navigator, Dick Krepel, kept saying, "Oh, my god, that's beautiful! Don't look! Keep your eyes on the road! That'a amazing! Don't look!" Apparently he was concerned with hairpin curves, no guard rails, and cliffs. Coward! Luckily there was a turn-off on the way back so I could enjoy a little of the scenery.

Jean Pierre makes intricate ceramic mosaics using a variety of materials. Many of his pieces use shards recycled from ancient Roman ruins. Occassionally he uses things as seemingly mundane as beach glass. They are large, complex, and beautiful and he has sold them to collectors around the world. He has a quick wit and welcomed Dick and I warmly in spite of the fact that he was in the midst of preparing for a huge show that was shipping in less than a week. 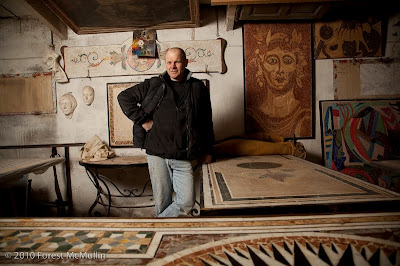 This is the first image from a project I'll be working on for the next three months, tentatively titled European Portraits. It's also the first time I've used some great new equipment the good folks at Manfrotto Distribution were kind enough to let me use. The Elinchrom Ranger Quadra is a very small, light battery strobe system that worked flawlessly. It handles and performs just like studio strobes, but the entire package with pack, battery, two heads, and cables weighs less than ten pounds. I can carry everything I need including lights, cameras, stands, modifiers, back-ups, and tripod on my back. Sometime in the next few weeks I'll post a video tour of this system.
Posted by Forest McMullin at 10:33 AM