I was warned about Ariski long before I came to Lacoste. I was told he was crazy, that he had attacked a student, that the local residents tolerated him, but that he preyed on foreigners. Stay away, I was told, he's trouble. Especially when he's been drinking.

I had seen him a number of times, walking through the village with his dog. Here comes the Yeti, one of the SCAD chef's had said to me when he saw him coming our way. He approached and I saw he was holding a heavy rope slung over his shoulder. I turned as he passed and realized the rope was tied to two cowboy boots and each was stuffed with fresh daffodils.

This past Sunday SCAD organized the Sidewalk Arts Festival where students, local children, and Lacoste residents spend a few hours drawing with chalk on the pavement. Suddenly the ground under one's feet is an explosion of color and a good time is had by all. While we were setting up, Ariski came ambling through. On  the spur of the moment I asked him if I could take his picture. "Est'ce que possible prendre une photo, Monsieur? Un portrait avec votre chien?" I asked. "Yeah," he replied in English. "Parlez-vous Anglais?" I asked. "A little." "I'll be right back, OK?"

I ran up the hill and fetched my camera and lights as quickly as possible. He was still there when I returned ten minutes later. He understood me and took direction very well as I asked him to sit on a low stone wall. His dog clearly wanted to be close by. They were both as gentle as could be. 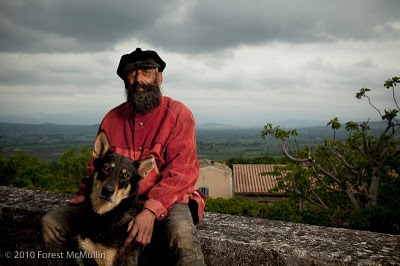 Posted by Forest McMullin at 6:25 AM