Andrea and I walked to Bonnieux a few weeks ago. Down the hill from Lacoste, across the valley, and then back up a hill into Bonnieux- it took us over an hour as we got a little lost and stopped often to inspect ancient stone walls, gnarled cherry trees, and the views in both directions. It was a perfect day with bright blue skies. As we came into the town, we passed a ceramics shop and decided to stop. We were immediately impressed by the quality of the work. The forms were graceful and perfectly rendered, the glazes colorful and painterly. The proprietor greeted us warmly and was pleased to speak English with us as soon as our basic French ran its limited course. He was Jean-Yves, the husband of the potter, he told us. It was quickly apparent he was her biggest fan as well. He gave us a tour of her studio and was interested in SCAD and the Lacoste program. We parted with his assurance that we could come back any time to photograph his wife, Christine.

We went back this past week, this time with a car so we could safely carry purchases of her pots, and my backpack full of photo gear. Jean-Yves was pleased to see us and after I had done a portrait of he and Christine we were surprised to be invited into their home. We were led through the living space into an airy sun porch were we sat for two hours, talking, drinking wine, and eating olives and crackers. We talked of our children, of our travels, we talked politics. Jean-Yves was particularly pleased to make a pun in English. Referring to me, he said, "Well, we like the Forest better than the Bush!" At one point he brought out an old family album of photographs of his childhood. His father was an avid amateur photographer and the album was filled with large black and white prints. He had a knack for capturing the subtle gestures of his family rendered in exquisite light. I told him how lucky he was to have such a detailed story of his childhood told in such a beautiful way.

Eventually we went back to the shop where Andrea and I bought several pieces to bring home with us as a reminder of our afternoon.

It was a perfect day. 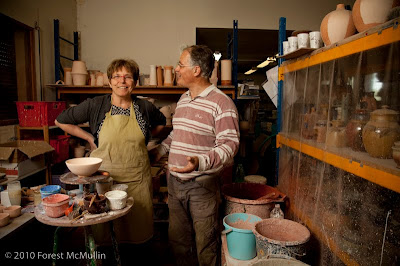 Posted by Forest McMullin at 3:19 AM