Week 4 from Out on Buford Highway

Of course, the restaurants on Buford Highway have some remarkable food. It's often interesting, authentic, and usually reasonably priced. But I'm a photographer not a food critic.

I've gone out there a number of times when many of the places weren't open. Very early in the day. Late in the day. I drive up and down and look to see how the light is hitting the buildings. I watch how they're lit up at night. A lot of them are extraordinarily banal. Anonymous storefronts in anonymous strip malls. Anywhere USA. But there are some that stand out. Odd architecture. Explosions of color. Strange signage. So I'll be showing some of those, too.

China Bucks sits by itself at 5412 Buford Highway. I've never eaten there. Inside it looks more like a cafeteria than a restaurant, but I love the building. It reminds me of a cross between an alien fortress and a 1960's world fair pavilion. I thought the brilliant blue sky played nicely against the red and white structure. 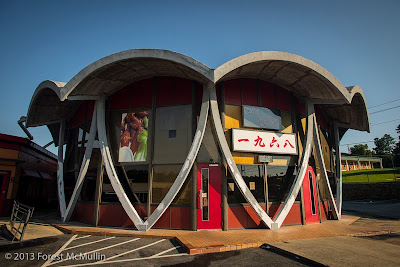 Posted by Forest McMullin at 5:11 PM