Week 3 from Out on Buford Highway

It was early on a Tuesday and I was driving around hoping for the sun to peek out from under the clouds. I drove a few blocks east of Buford Highway to a Cuban bakery I knew about, The Pan American. As I was photographing, the proprietor of the business next door, La Chiquita Cafe, arrived and was tidying up before he opened and customers began arriving. Jose Lopez and I spent a few minutes talking as I thanked him for letting me take his picture. I love the fact that his window lets you know that he has products from Cuba, Argentina, Uruguay, and Mexico as well as accepting EBT (food stamps). By 10:00AM the regulars are at tables inside and out, drinking coffee and playing dominoes and cards. La Chiquita is at 3669 Clairmont Rd. 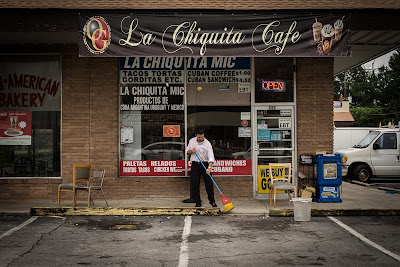 Posted by Forest McMullin at 3:54 AM